Kauri Gum is the fossilised resin or sap of the Kauri Tree. The age of the gum can vary significantly – anywhere from a few hundred years old to many hundreds of thousands of years old. Some Kauri Gum found in the Otago in the South Island has been estimated by scientists to be over 175 million years old and is actually Amber. (See the section on Kauri Gum versus Amber for full explanation). Most of the Kauri Gum found on the Gumdiggers Park site is between 46,000 -150,000 years old.

Although used for generations by the Maori people (they used it as chewing gum, for lighting fires and tattooing) the Kauri Gum industry had it's beginnings in 1814 when a trial shipment was sent to London by early European pioneers who were keen to export products back to their homeland. Although nothing became of that shipment and it was dumped in the Thames river it was the beginning of one of our largest founding industries.

This is why the gum diggers would target their excavations around the bases and crowns of the trees. The timber was superfluous to them and was often burnt for firewood although many fixtures and some walls were made from Kauri in the Gumdiggers' huts. The influx of "gum diggers" to the Auckland and Northland areas from about 1830 provided the basis for one of our largest ever export industries earning our country even more revenue than farming in the early 1900s.
Between 1850 and 1950 over 450,000 tons of Kauri Gum, worth 25 million pounds had been exported to manufacturer varnish. Unfortunately most of the Kauri gum was exported overseas; mainly to Britain but also to Australia and the USA. Very little remains in this country and there is probably almost none remaining in the ground. 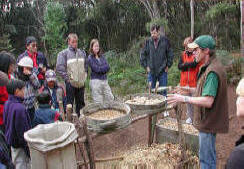 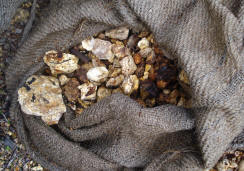 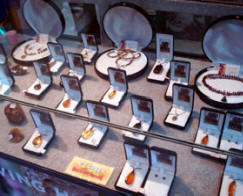 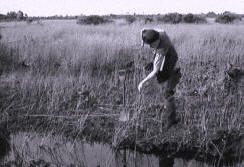 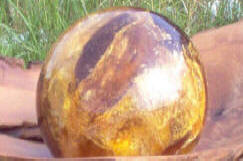 There are different grades of Kauri gum and the gum diggers received varying prices depending on the quality. The most prized was "white" gum and the clearer the better. The yellow grades were next valuable, followed by the brown and "chalk" was the least valuable of all. The poorer grade gum was primarily used in the manufacture of linoleum and paints.

The Gumdiggers would spend many hours sorting, scraping and cleaning the gum to obtain the best price. Often individual pieces of gum would be polished to a brilliant shine and kept for personal enjoyment. Sometimes the gum was carved and shaped into extraordinary sculptures or softened and worked so that it resembled fine "hair" (see examples below).

Towards the end of the gum digging industry when buried gum was in short supply, the gum diggers started cutting notches in living trees to collect the sap. Once hard it could be sold. This practice was quickly banned when it became apparent that it was killing the trees. Later, as supplies of gum dwindled even further, large automatic Gum Washing Machines appeared on the gumfields to process the large amount of small "gum chips" that were left behind from earlier excavations. (an example is pictured at the left).
Nowadays there is little Kauri Gum remaining for sale. Occasionally individual pieces that have been polished can be found for sale in antique shops, tourist shops or online. Due to the rarity of quality gum the prices are increasing at a rapid rate. A quick search of the Internet shows a few sites selling Kauri Copal with prices from ten dollars to many thousands of dollars for a quality piece of Kauri Gum.
Website by Creative Web Designs﻿